On Tuesday May 26th 2020 I got on a FaceTime call with Ottawa Redblacks’ star defensive back Sherrod Baltimore which I would say changed my life. Just over 2 months into the COVID-19 pandemic, I was bored out of my mind. Being locked up in one home for what felt like forever, being around the same people every day and with nothing interesting happening around the world, it felt like there was a huge pause on life, but in reality time was still ticking and I was eager to do something, something productive and meaningful.

As a sports reporter, there weren’t a lot of stories to be told considering there were no sports being played worldwide and with school being moved online I had a lot of time on my hands to do something productive. I began to think of ways I can be productive and think of projects that can not only help kill time during the lockdown but also benefit myself in the long run. A few ideas came to mind, and originally I was thinking of just doing small stories on some Ottawa Redblacks players here and there, telling the story of how they got to where they are and why they should be watched moving forward in their careers, but those ideas shifted once I talked to Sherrod Baltimore. Sherrod and I had done some work together prior to the pandemic, and we’d known each other since he came to Ottawa in 2017 so I was hoping to do a short story on him, similar to those I was planning on posting and while we were in the mix of starting that story he brought up an idea of his own. After having his own story highlighted in a TSN Original Documentary during the 2019 CFL season by Rick Westhead, Sherrod wanted to highlight the stories of some athletes he’s met while in Ottawa. He approached me with the idea of telling the story of how a football player from Ottawa makes it to the NFL and/or CFL, the goal would be to show people around the world how difficult the journey can be and to inspire the next generation of 613 athletes to continue their own journey. 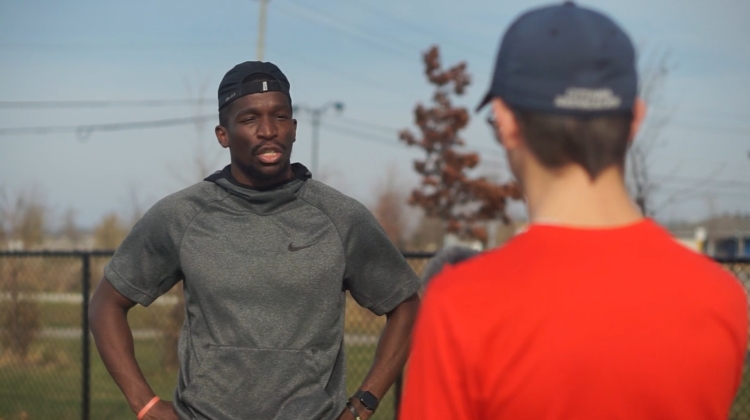 At the time I had only written articles on my Ottawa Redblacks based website and created a few highlight tapes and vlogs so I wasn’t sure exactly how great the story was going to look as a documentary, but I knew I was all in for the project. Anytime someone like Sherrod comes around with an insane opportunity like that, you’ve got to jump on it and I’m glad I did.

The project ended up taking just over 3 months to be completed and looking back at it, those are three of the best months of my young career in the sports media business. Throughout the time planning, filming, doing interviews, editing, marketing and publishing the documentary which we call “The Journey From The 613” I met so many great people, I learnt more than I thought I ever would and I gained some awesome experience, working on a project like that. Everything about the project was beneficial, and the content provided, although it may not have been a TSN or ESPN production, was something I am proud of and thankful for.

Telling the story behind Sherrod’s relationship with Coach Jean Guillaume, a legendary coach in Ottawa who I am blessed to be able to call a mentor now as well as the stories of Ottawa-raised football stars like Neville Gallimore, Eli Ankou, Jesse Luketa, Christo Bilukidi, Akheem Mesidor, Katley Joseph, Jackson Bennett, Alex Mateas, Jesse Palmer and more was a fantastic idea. Getting over 13,000 combined views on YouTube, “The Journey From The 613” reached the eyes of many people and really brought together the football community in Ottawa, showcasing the stories of players from all over the city, from the east side of Ottawa to the west side, the project’s main goal was to bring the city together as one and provide the exposure that the athletes from the capital of Canada truly deserve.

I truly believe a lot was accomplished through this one 4 part documentary series, and it kickstarted something even bigger in my platform JZ Media which is approaching it’s one year anniversary as we look back on the documentary that was posted October 24th, 2020. My website at jzmedia.ca and the entire platform I have created with JZ Media would not exist if it hadn’t been for the documentary I worked on with Sherrod Baltimore and Coach Jean Guillaume last year. The impact they’ve left on myself and the opportunities they each have gifted me is unbelievable. JZ Media has over 300 articles published, and continues to hit milestones as I move forward with my career in sports media.

See some of the top JZ Media posts below and even tune into the documentary series “The Journey From The 613”.

“I see this being a premier company in sports by the end of 2021.” co-founder of Personal Corner Dan McCreesh beyond excited to help grow with Dez Bryant